How Trump Won't Be Allowed to Win the Nomination 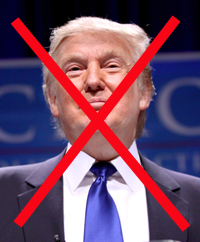 Below are a list of tactics that Establishment Republicans may use to block the nomination of Donald Trump. Yes, I know. If they succeed they will not win the White House but many in the establishment will make just as much money under a Democrat insider as they will with a Republican insider. So they may not care.

All they may want to do is send the message to any future “outsider” candidate, “This is our party and you need our approval to participate. If you try to do this without us we will destroy you.”

These tactics were used in 2012 to keep Libertarian insurgents from winning delegates to the Republican National Convention. The fear was that Ron Paul would be able to place his name in nomination and give a speech about capital cronyism and how big corporations use the system to corrupt free enterprise. Donald Trump can learn from our experience.

Editor's Note: one tactic this writer left off the list was the theft of a delegate's credentials which I have personal knowlege of during the 2008 Ron Paul campaign. The criminal scum who run the Republican party will stoop to any level or depravity to get what they want.