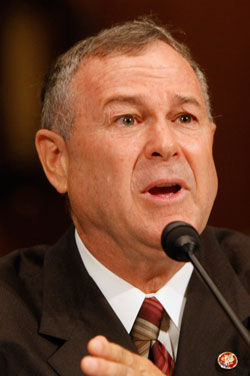 WASHINGTON – Rep. Dana Rohrabacher, chairman of the House Foreign Affairs Subcommittee on Europe, Eurasia, and Emerging Threats, on Saturday issued the following statement concerning Turkey’s shooting down of a Russian jet fighter on the Turkey-Syria border.

... Russia should be applauded. Instead, it is being castigated for doing what our government is unwilling to do to confront the terrorist offensive now butchering innocent human beings from Africa, to the Middle East, to the streets of Paris.
If being in NATO means protecting Erdogan in this situation, either he shouldn’t be in NATO or we shouldn’t.