The excerpt below is from a text of talks given by Noam Chomsky, the full text of which is available here. I highly recommend downloading this PDF and reading the entire thing. Chomsky's views are readically defferent from anything you'll hear in the drive by media or even from most patriot and libertarian sources. In fact while I have no reason to know if George Carlin and Chomsky ever met, Carlin's historic rant about who really owns this country and your miniscle place in it can be found here with all the foul language in tact and perfectly, if colorfully, similarly reflects Chomskys point of view - remember the truth will set you free!

Keep in mind that this statement from Chomsky was made in the early 1990's and is as true today as it was then. When then, cannot the candidates including Mr Trump and his idiotic companions in crime come close to a statement like this. Perhaps it is because they like keeping you in a state of willful ignorance. 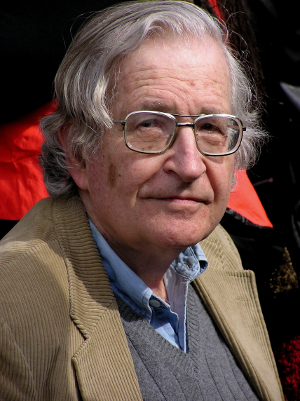 Questioner: Dr. Chomsky, I have a question. Would you agree that in this attack on the less powerful people of the world generally, there is also a secret, vicious war being waged on the Muslim people? And what do you think is in store for Muslims in general in the world?

Well, it does happen to be the case that plenty of Muslims have been getting it in the neck from the United States - but that's not because they're Muslims, it's because they're not sufficiently under control. There are plenty of white Christian people who are also getting it in the neck. In the 1980s, the United States fought a vicious war in Central America primarily against the Catholic Church - and that means European priests, not just priests from indigenous origins - because the Church had started working for what they called "the preferential option for the poor," therefore they had to go. In fact, when Americas Watch [a human rights organization focused on North and South America] did their wrap-up study on the 1980s, they pointed out that it was a decade framed by the murder of the Archbishop in 1980 and the murder of six Jesuit intellectuals in 1989, both in El Salvador-yeah, that wasn't accidental.

See, the Catholic Church became the main target of the U.S. attacks in Central America because there was a radical and very conscious change in critically important sectors of the Church (including dominant elements among the Latin American bishops) who recognized that for hundreds of years it had been a Church of the rich and the oppressors, which was telling the poor, "This is your fate, accept it." And so they decided to finally become a Church in part devoted to the liberation of the poor - and they immediately fell under attack.

So you're right, it is true that the U.S. is attacking a substantial part of the world that happens to be Muslim, but we're not attacking it because they're Muslim-we don't care if they're Martians. The question is, are they obedient?

This is very easy to prove, actually. For instance, there's a lot of talk in the U.S. about "Islamic fundamentalism," as if that's some bad thing we're trying to fight. But the most extreme Islamic fundamentalist state in the world is Saudi Arabia: are we going after the leaders of Saudi Arabia? No, they're great guys-they torture and murder and kill and all that stuff, but they also send the oil profits from their country to the West and not to the people of the region, so they're just fine. Or take non-state agents: I suppose the most extreme fanatic Islamic fundamentalist in the world is Gulbuddin Hekmatyar in Afghanistan, who got over a billion dollars of aid from the United States and Saudi Arabia and is now tearing what's left of Afghanistan to pieces. Yeah, he's a good guy, he's been fighting on our side-narco-trafficker, terrorist, all those things, but doing what we wanted.

On the other hand, if Islamic fundamentalists are organizing clinics in the slums of Cairo, they're going to have to go, just as the liberation theologians in Latin America who happened to be Basques - you know, blue eyes, blond hair and so on-had to go. I mean, there is a racist element to U.S. policy, of course, but the basic motivation is not that, I think. The real goal is just maintaining obedience - as in Cuba, as in Panama, and so on.